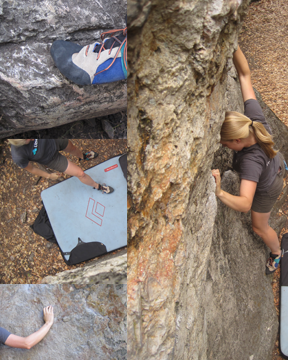 With the new prototypes Ray helped us build, we've moved from proof-of-concept to design optimization and user feedback.

Since the last post, I've simultaneously been drafting our patent application and modifying the Beta prototypes that fit me. Dan was able to take some nice shots of the Beta prototypes in action while I was testing them at Indian Rock in Berkeley this weekend. I'm proud to say that this pair of Betas is now passing 14 of the 17 tests which I've been using as a metric for prototype performance. This is up from the original 8 tests it passed when I first tested them a week ago.

When we have an official filing date from the USPTO, I plan to put up more detailed photos of SFT's prototype shoes to satisfy everyone's curiosity.

Once I've optimized the Betas that fit me, I'll modify the pair that fits Mak. Then I'll get in touch with everyone who's offered to try out prototypes and organize opportunities for some user feedback! This first round will necessarily be limited to volunteers who fit the two pairs of Betas available, so we'll play Cinderella. If you want to help out (and haven't already let me know) and think you'll fit the glass slipper, email sftclimbing@gmail.com with your contact information and foot size.