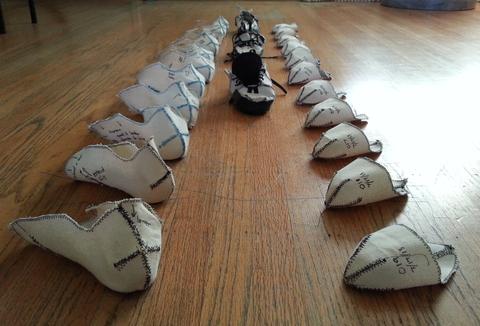 Three weeks ago, we started making patterns. In order to really tackle the two most important parts of the shoe, we decided to create separate patterns for the toebox and the heel cup. After a week of iterating improvements on these patterns, we finally began putting them together. Over the course of another week, we experimented with combining the two parts of the shoe to make sure everything fit together nicely.

With one resoling kit and one salvaged sole from a previous shoe, we applied rubber to three of our prototypes, using bicycle inner tubes as rand material. On Wednesday, we finally got a chance to really test our work by going climb testing at the nearby climbing gym. We were pleasantly surprised with the sensitivity of the shoes. In some cases, the rand didn't cushion the toes enough, but bicycle tubes are about 0.8 mm thick, compared to 1.8 mm standard rand rubber which we'll use for our next prototypes.

We finished just in time to drive to Las Vegas to work with Ray!