Pictures of the Day: July 16

So... we broke the sewing machine. When advancing the foot, it seemed like a belt was slipping. We turned it over and removed the bottom plate only to find that this machine doesn't have any belts. Instead, it has three sets of bevel gears, one set of which was missing several teeth.

The nearest repair shop did have replacement gears for the 40-year-old die-cast machine, but having it professionally fixed would take a week. Oh, and that according to the mechanic, "you have to take the whole thing apart" from the top shaft with the cam, down the body by the motor, to the bottom shaft in the base where the broken gears actual were. We could see them and touch them and remove their set screws, but not get them out without taking every access panel off and futzing around inside a lot. It looked like a mess. 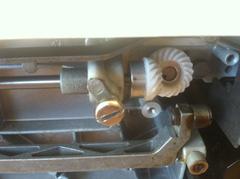 But what would our meche degrees be for, if we can't fix it ourselves and get our hands greased up (and seriously, there was a LOT of grease in there. The top worm gear interface was practically a fluid coupling) and play with all the screw-drivers in the garage? And hammers. Because that's what we resorted to. It turns out that most of the items removed from the top did not have to have their rusted-out threads budged. By taking out the plug on the side and applying some judicious hammer tapping, we got the bottom horizontal drive shaft and vertical drive shaft out, and replaced the gears. Then came the fearsome task of re-timing the machine. This is what all sewing repair shops advise you not to try. Well, Mak took an educated guess, found out that didn't work, took another educated guess, and had things properly synchronized. Not too fearsome, after all.

Then we buttoned everything back up, less a great deal of rust-laden grease, and carefully ran the machine. The thread tension had to be messed with a little and then it was functioning better than before! 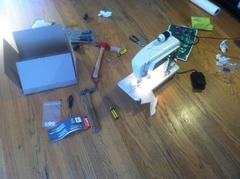 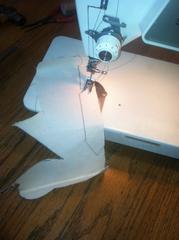